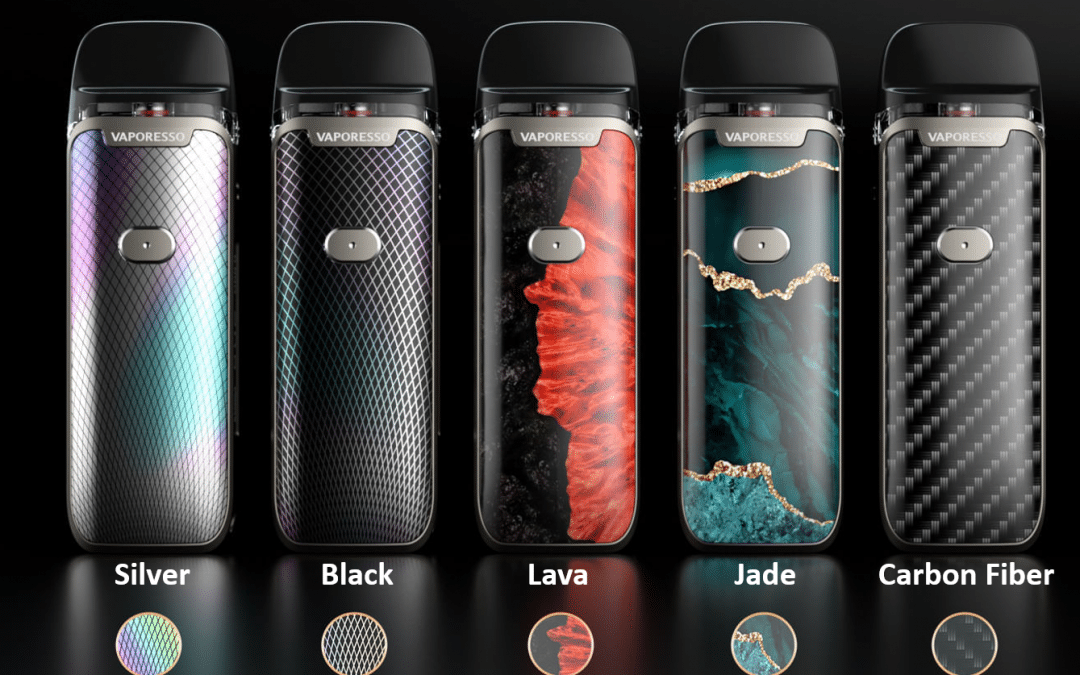 I have been meaning to try a pod device for a long time and for some stupid reason I was putting it off. That was until I saw the Vaporesso Luxe PM40, and decided it was the Pod that was going to pop my pod cherry. Not only was it the style and features of this device that made me want to give it a go, I was also wanting smaller, more portable device. And I am so glad I went with this little gem!

Now before I go into my experience and its performance with this awesome little device, let’s cover what comes in the kit.

What You Get in The Kit

Inside the box is:

My first impressions of this Pod device were how sleek, light, and small it is but still feels like a very well made device. It was hard to choose a colour as I liked the look of all of them however, I went with Jade. Personally I love how shiny and smooth it feels in the hand and the gold detail really pops. The gunmetal colour framing also gives a nice effect and is fingerprint proof.

It’s compact design easily slides into your pocket or handbag without weighing it down. The OLED screen located on the side is small but bright enough to show all the important information such as battery power and wattage setting clearly. Another reason I went with this particular pod was the clear and visible pod cartridge.  Even though its mostly hidden, it’s still enough and easy enough to see the level of e-juice without having to remove it.

The charge port is in such a great spot located under the screen. This means it charges upright and you don’t have to turn it to see the screen while its charging. On the opposite side to the fire button is the adjustable airflow control. It’s a little stiff but I think that’s a positive so it doesn’t accidently move when its in your pocket or bag.

I love that it is so simple to use! Single button operation with standard 5 clicks for on and 5 clicks for off and 3 clicks to change the settings. That did take a little getting used too as I’m not used to using the fire button to also change settings but its not a bad negative. To be honest, I haven’t had to change the settings at all. It automatically reads the resistance of the coil and pre-sets the wattage for you when you install a new one and I haven’t felt the need to go higher than recommended wattage.

Being used to big sub-ohm tanks that use big coils, I wasn’t expecting the same experience with smaller coils. However, I’m very impressed with the flavour from the GTX coils and even more impressed with how long the 0.8Ω lasts. For a lower powered device it still holds its ability to create big clouds yet, it also caters for more of a discreet MTL vape.

Again being used to sub-ohm tanks with a round drip tip, I was surprised how comfortable the duckbilled shaped mouthpiece of this pod feels.

At first, I did feel like I was going to snap and break the mouthpiece when I needed to refill. Since changing the entire cartridge, I realised that either the previous one was stiff, or I wasn’t used to pushing the mouthpiece off to expose the fill port. (Just in case you have the same experience as me with that, you’re not alone and it could just be the cartridge).

Filling is super easy with the fill port having a soft silicone type of plug that fits gorilla bottle stems perfectly. It’s easy to fill yet very hard to get e-liquid to come back out from the fill port. You don’t have to remove the entire cartridge either to refill which is great! Under the mouthpiece there are two indented circles with slightly raised edges on each side of the air intake. This means it doesn’t matter which way you replace the mouthpiece, the fill port has extra antileak protection.

Removing the pod for coil replacement is just as easy as filling it with e-liquid. Friction holds the pod in place firmly with no wiggle room yet pulls out and goes in easy.

I love the plug and play coils! There is no worry of twisting a coil in too tight, just push the new coil in (after priming) and you’re good to go! Like most tanks, it’s best to replace the coil when the cartridge is empty. However if there is still e-liquid in the cartridge, let it gather away from the coil before removal.

Out of the two coils that come in the kit, I definitely prefer the 0.8Ω (rated for 12-20W) over the 0.6Ω (rated for 20-30W). I found the 0.8Ω lasted way longer and had greater/better flavour overall. It’s important to make sure you’re getting the correct GTX coils for the Luxe PM40 by double checking the double red silicone rings towards the base of the coil. Single rings will cause the device to leak!

I was using 70/30 of one of my favourite flavours, Red Dragon for both coils and found they did best running on a lower wattage range.

I have been using this device for almost 4 months now and I have tried to put it through it’s paces, the leak proofing is second to none. I have intentionally left it in my bag overnight, on its side for extended periods of time, and I haven’t had it leak! The only time is sort of did happen is I did accidentally flooded a new coil, once! Since that was my bad I cant blame it on the device.

It comes with a bit of charge however, it only takes an hour to go from flat to full. You can also use it while it’s charging which I found came in really handy when in the car. The charge port is located on the side under the LED screen allowing for upright charging. It’s “turbo boost tech” keeps the hit constant as the battery drains. This means you don’t have any power loss when the battery is low, it only stops working when the battery is flat.

Battery life, as with all devices, will vary depending on the wattage being used and the type of coil. Personally I have been very impressed with the battery life. I have found I am getting the same vape time as I do with a dual external battery device.

I am very happy with this device and have little to no complaints about it. Vaporesso has done well with its design and features for this Pod device. It’s a great portable device making handy for when you want something to fit perfectly in a pocket. I actually like it so much that I’m going to get it in another colour. If you are in the market for a new Pod device or want to give one a go, I highly recommend the Vaporesso Luxe PM40!

Get Your Hands on the Vaporesso Luxe PM40 Here!

Have you tried this pod device? We would like to know your thoughts and experience so let us know in the comments below!